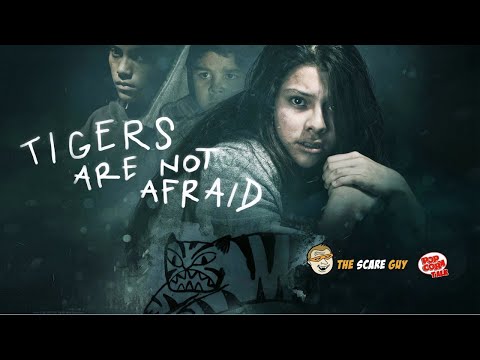 Special guest Issa Lopez, writer and director of the critically ballyhooed Spanish-language horror Tigers Are Not Afraid, sat down with hosts Kari D. Lane, Luke Cheeseman and Ben Kliewer on The Popcorn Talk network’s horror-centric show The Scare Guy to talk about her film, which sits at a whopping 97% on Rotten Tomatoes and is available to stream on Shudder.

During the interview, Lopez spilled precious details about her new team-up with renowned filmmaker Guillermo del Toro, who became integral to the rise of Lopez’s gritty horror Tigers Are Not Afraid, having never actually met her in person.

“I didn’t know him; he liked the movie. Eventually, after championing it, in the amazing, generous way that only that man can do, he reached out and said ‘Let’s make a movie together!’ So yeah, it’s true. He’s producing a movie that I’m writing and directing. It’s beautiful!”

Lopez admitted that she’d kept mum on the project with del Toro for quite a while. “I’m usually super respectful of announcing stuff, it’s an entire weird machine… then I woke up one morning and my Twitter account had completely exploded.”

During an interview, the man himself had spilled the bean about a “werewolf movie with Issa Lopez.”

“Ugh, another werewolf western? Come on!” host Ben Kliewer joked, to which Lopez responded “I know, I know! From the minds of two crazy Mexicans!”

As it sits, the film is still in pre-production, pending developments on the COVID-19 pandemic. Check back with  Popcorn Talk and The Scare Guy for future updates on this as-yet-untitled Lopez/del Toro western!

If you love Issa Lopez, Guillermo del Toro, and werewolf westerns, share this article with a friend.  Tune in to Popcorn Talk Network daily for all the latest news and info on the world of film.

Ben Kliewer is an actor, comedian, host and geek who was born and raised in Kansas but now resides in Los Angeles, CA with his wife and their dog.