Leah Lewis and Alexxis Lemire also share their favorite moments from working with Director Alice Wu, what it means to bring visibility to the LGBT community, and TEASE A SEQUEL! 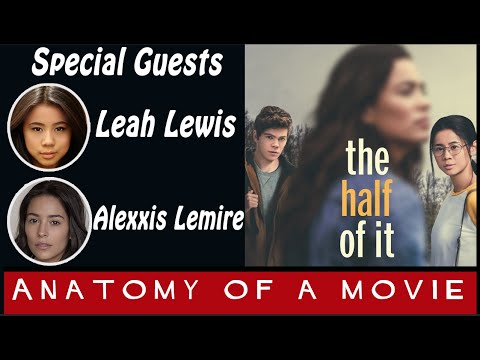 PTN SPOTLIGHT: Leah Lewis, Alexxis Lemire, and The Half of It

If you thought you knew enough about Netflix’s incredibly real and moving new rom-com, you don’t know The Half Of It. And if you thought you couldn’t love stars Alexxis Lemire and Leah Lewis any more than you already do, think again.

The Half Of It is a love story at its core, and as opposed to other LGBT tales that focus on the typical coming-out story of sharing one’s sexuality with everybody and their mother, this movie focuses on one’s journey to realize who they are for themselves.

Directed by Alice Wu (@subwayalice) and produced by Likely Story….. I finally present to you the trailer for this movie. I pretty much bawled my eyes out last night to this and I just want to stop and thank the miraculous group of people who made this happen. Without you, there was no us. This story came to life with all the love, hard work, and friendship that you can imagine. This is for you. @daniel_diemer @alexxislemire @wolfgangnovogratz

Leah Lewis portrays Ellie Chu, who’s a “shy and introverted” young scholar that wrestles with being seen by everyone in her life. It’s not until she meets Paul Munsky, played by Daniel Diemer, that Ellie truly feels comfortable opening up to others.

However, Ellie’s ability to open up takes on a new life when Paul tells her that he’s in love with popular girl and priest-daughter, Aster Flores. Ellie begins to write letters to Aster as if they were written by Paul, and Aster finds herself falling for the person behind the letters.

We loved this movie so much that we had to get Leah and Alexxis on Popcorn Talk’s Anatomy of a Movie to talk all about their incredible characters, their time on set with Director Alice Wu and the rest of the cast, as well as their electric chemistry on and off screen.

I believe we find many soulmates in our lifetime; and there’s no doubt in my mind that I’ve found that in you. You have become one of my absolute best friends. I knew the SECOND we met, I’d found a forever friend in you. Thank you for accepting me for who I am and loving me and my flaws. You truly are one of a kind, Leah Lewis. This is only the beginning. Love you to pieces, leeleeana. Xx

Leah and Alexxis shared incredible insight from both an actor’s and viewer’s perspective of their characters Ellie and Aster. When asked about what it was like tackling this long-awaited project from Director Alice Wu, Leah shared that she gravitated toward this film, due to the way it represents the LGBTQ community.

“It’s not necessarily a story of coming out, more as, it’s kind of the beginning stages of coming to and kind of having a self-realization for yourself and even realizing that you might be capable of having these kinds of feelings.”

@subwayalice is the heart behind all of this. Thank you for sharing that ♥️ with me and the world. Similarly to Paul/Aster changing Ellie’s life, you have forever changed the course of my life and so many others during this. I love you mom. 🐛

As Leah shared that Alice had such an incredible vision for the film and she did such an amazing job of telling this relevant story, Alexxis shared those sentiments and mentioned how rewarding it was for her to land this role.

“Working with Alice was one of the most incredible experiences of my life. She reminds us constantly about how many people she went through in the casting process to find us, and that was such an amazing feeling.”

my heart feels a little heavy today, missing these ones. Crazy how in just 2 short months, you can grow so close to people. And in that small amount of time, they can have such a huge impact on your life and who you are as a human being. These 3 challenged me in ways that forced me take a step back and gain perspective… and empathy. They have shaped me into a better person, and for that I am eternally grateful. I can’t wait to show the world the magic we made💫 you don’t know the half of it…

Another incredibly real and important topic this film touches on is the topic of how religion can influence sexuality and one’s life’s decisions, and Alexxis shared what her character Aster was feeling in that regard.

10 days until you meet Aster Flores🤍 The Half Of It, May 1st on @netflix

Alexxis also pointed out that the connection we saw on-screen between her and Leah was absolutely real and that she is so grateful to be able to work with someone who brings these feelings out of her.

Writer and Director Alice Wu also brought out a lot from Leah as Leah tackled an extremely real and very important LGBT character in Ellie. Leah discussed what it was like portraying Ellie and how much it means to bring visibility to the LGBT community.

“It’s so interesting because I have watched and read different stories like this and I never would have imagined that I could have the privilege of playing a character like this, one that has such an emotional arc, really. It’s just…it’s such a privilege and an honor to be giving life to a story like this and knowing that there are real people out there that relate to this and need to know that their story is important and needs to be told and is seen.”

The movie ends with every character going their separate ways, and while we don’t see the ride-off-into-the-sunset romantic moment that we obviously hoped for, it was also great to see this refreshing and very true-to-life ending of a high school romance, especially an LGBT romance.

After teasing us with a “Bora Bora” sequel of Aster and Ellie on Love Island, Leah shared some insight into her character’s ending.

“Even though they do not end up together in this, I feel like it is such a happy ending because they kind of walked away with a piece of themselves and also this newfound information about each other…and I feel like the sequel at the moment is hearing people’s stories, like people’s lives and the people that have been through the Ellie Chu situations and the Aster Flores situations of the world. What happens after is literally what happens to you guys in real life.”

While we’re here begging Netflix to give us a sequel ASAP, we’ll at least have the sweet sentiments of Alexxis’ thoughts on Aster’s ending to keep us going.

“I really do think it is a happy ending for themselves. I think what is so important is just remembering that with these normal happy endings, you don’t see kind of what goes on after that. Normally, in real life, we don’t just ride off into the sunset. It’s also just like, life happens you know. And sometimes the odds of even couples staying together through college years, there’s just so much and then with these added layers of Aster’s family, and my religion, and my art, and Ellie writing, there’s so much that goes into it.”

After discussing the film’s ending, we unfortunately reached the bittersweet ending of our time with Alexxis and Leah and when I tell you how honored we were to have them, you don’t know The Half Of It.

The Half Of It is available to stream now on Netflix, and if you haven’t watched this incredibly moving film yet, WHAT ARE YOU WAITING FOR?!

When she’s not writing adorable love letters as Ellie on The Half Of It, you can catch Leah on CW’s thrilling murder-mystery series Nancy Drew. Also, If you want to see more of Alexxis’ incredible acting like she delivered as Aster, check her out on other suspenseful flicks like The Art of Murder and Truth or Dare.

After you’re done rewatching The Half Of It for the 1000th time like we have, be sure to catch Alexxis and Leah’s full interview here! And if you loved this article as much as we love Leah, Alexxis, and The Half Of It, share it with a friend and check back with Popcorn Talk for all the best in movies and entertainment.

Bryant Santos is a Social Media Manager and pop culture enthusiast with a passion for fashion and television. As a host for AfterBuzz TV, Bryant loves to bring you all the juiciest news and gossip about your favorite TV shows and celebs. Bryant brings his bubbly personality, quick wit, and an insightful LGBT perspective to many AfterShows including wrestling, teen dramas, sci-fi/fantasy, and more!

If Audrey Hepburn were Alive Today: Virtual Benefit with Spielberg and Humanitarian...

Star Wars: The Rise of Skywalker (2019) … is a Guilty Movie Pleasure!
Scroll to top