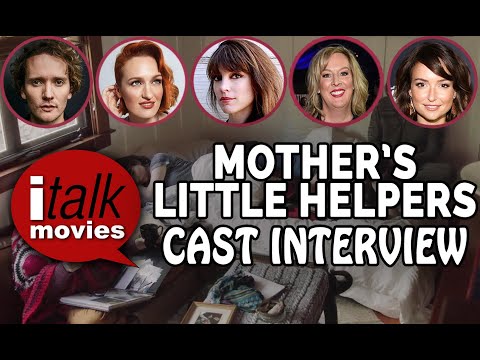 What happens when a group of talented, driven actors get together to tell a story about a family of adult children returning home to care for their dying mother to do right by her, even though she did them wrong? A lot of improv, a dash of magic, and a film that gets rave reviews! The film stars Breeda Wool (UnREAL, Mr. Mercedes), Melanie Hutsell (SNL, Bridesmaids, Grown Ups2), Sam Littlefield (Batwoman, The Messengers), Milana Vayntrub (This is Us, Robot Chicken) and Kestrin Pantera (Let’s Ruin It with Babies, Bad Parent Teacher, Knocked Up Thoughts), who wrote, directed and starred in the film.

When I sat down with the humble bunch, here’s what they had to say on what makes Mother’s Little Helpers so special.

KESTRIN: “I was so blown away with Melanie’s interpretation, but it was like- I was like, imagine you’re like Willie Nelson or just someone who everyone loved, uniformly loved, but maybe would be a challenging parent figure like maybe you aren’t always the perfect mother like textbook wise. And I,  just  everyday, I just thank the world that Melanie Hutsell agreed to be in this film as well as Sam, Breeda…(Milana) and everyone. I’ll let them speak to it because there was a lot of improvisation and people bringing their own personal experiences dealing with loss….”

AB: [Melanie] What brought you into this film? What made you intrigued and wanna take on the role?

MELANIE: “Well Kestrin asked me to have coffee and she, she wanted to run the idea by me. We had met backstage at a crazy theater show I was doing and, I mean to be honest with you, I’m so humbled by what Kestrin spoke about me earlier because I feel just as grateful and just as lucky. You know I think part of being in this business, you know, you have to have timing and luck. And I just feel lucky that the Universe aligned so that I could be a part of this project. It is one of the most fun and interesting things I’ve ever been a part of. When she described this character, Joy Pride, as the female version of Willie Nelson,  ‘I was like okay I’m in, I like that!’  And because, you know, I’ve mostly done sketch-comedy for over half of my life, and you know, I’ve done little bits and pieces here and there that were a little more serious, but to get to play this Mom that was the core of the dysfunction of this family and she’s dying and you know the kids who are so angry with me to have these scenes unfold was just- it was extraordinary.”

AB: As Kestrin mentioned, there was a lot of Improv going on, how much of that took part in what you were doing, how much of it was scripted?

BREEDA: “There wasn’t a script!  Basically we, Kestrin was like, ‘We making a movie!’ … Kestrin comes at it with this very community-oriented kind of incorporative style where she, …I mean I’m- I’m going to tell you what she does, and it may or may not be true but from where I was sitting …..she has a finger on the story, overarching story, and we all got together and she had this board and all this stuff and it wasn’t always clear what the, like total arc of the story was, but what was very clear was my role in the film, my role in the family, and my role as the older sister to these siblings. And a lot of backstory and also a lot of just like openness around me, incorporating what I wanted to incorporate.”

AB: [Milana] “I’d love to hear your experience with this film. Why do you think it’s had such a successful run, especially at a place like South by Southwest ,which is considered a prestigious place to get your film into?”

MILANA: “I think it’s a really special, wonderful film. I think especially at South By (SXSW). South By is a Grassroots kind of base.  It’s like a home for filmmakers that love film and make it at any cost and that’s what this is. Like, we made a movie that we pulled out from inside of us with really nothing else but our guts and will and friendship.”

AB: [Sam] “What’s one big takeaway from this film that you hope people get from it? Maybe something you’ve learned from the process too.”

SAM: “Having gone through this journey of having to go to South by [Southwest] and all over the world and now it’s coming out in  digital format, it’s just been really cool… People have constantly come up to me, and telling me about their families and their experiences and their siblings and their parents and how it related to them. And I feel like,..,you know, it does feel like a gift in that way. That people are able to watch this movie and see themselves in it, have their life reflected back at them, and I just want that to continue on. And I think it’s great that it’s now in a format that, unlike the film festival circuit, which it was in, it’s just more accessible to everyone and during this time when we’re in quarantine and we’re being faced with our families in our lives. I think this has the opportunity to give that gift to people and I just hope that it keeps going.”

KESTRIN: “I think that there is a part where, right now, everyone feels like it’s happening to them, and everyone is losing something really special to them right now.  The whole world, everyone has lost something. If it’s a job or if it’s their freedom to go to Coachella or if it’s just- their spirit. There’s a lot happening. They lost their kids ability to go to school, if there’s anything there that our story speaks of it’s that we can survive this and there’s nothing to be gained from being stuck in your house with her family and her daughter to be found, and if there’s ever a time that it’s not just you and you’re not alone and we’re all in this together…I hope this film brings that Spirit of survival and connection.”

This is just a taste of what Mother’s Little Helpers is all about! Be sure to check it out for your next movie night on Amazon Movies or YouTube! For more information, you can also visit MothersLittleHelpers.com

To catch the rest of this interview and hear more behind the scenes stories, tune in on @ThePopcornTalk